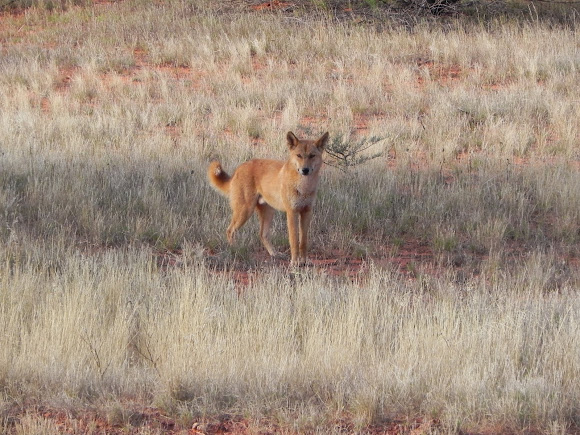 The Australian Dingo or Warrigal is a free-roaming wild dog unique to the continent of Australia, mainly found in the outback. Its original ancestors are thought to have arrived with humans from southeast Asia thousands of years ago, when dogs were still relatively undomesticated and closer to their wild Asian Gray Wolf parent species, Canis lupus. Since then, living largely apart from people and other dogs, together with the demands of Australian ecology, has caused them to develop features and instincts that distinguish them from all other canines. Dingoes have maintained ancient characteristics that unite them, along with other primitive dogs, into a taxon named after them, Canis lupus dingo, and has separated them from the domestic dog, Canis lupus familiaris. Dingoes play an important role in Australia's ecosystems; they are apex predators and the continent's largest terrestrial predator. Because of their attacks on livestock, dingoes and other wild dogs are seen as pests by the sheep industry and the resultant control methods normally run counter to dingo conservation efforts. Today, it is estimated that the majority of the modern "dingoes" are also descended from other domestic dogs. The number of these so-called dingo hybrids has increased significantly over the last decades, and the dingo is therefore now classified as vulnerable.

Today dingoes live in all kinds of habitats, including the snow-covered mountain forests of Eastern Australia, dry hot deserts of Central Australia, and Northern Australia's tropical forest wetlands. The absence of dingoes in many parts of the Australian grasslands is probably caused by human persecution.

A nice wild dingo, waiting at the side of the road until everybody had taken pictures, then he turned around and ran away.