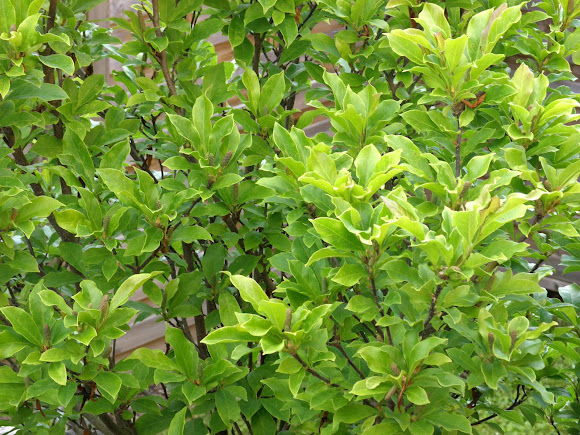 my magnolia tree in May It is a deciduous shrub, exceptionally a small tree, to 4m tall (smaller than most other magnolias), and blooms profusely in early spring with large pink to purple showy flowers, before the leaf buds open.

Magnolia liliiflora (variously known by rather many names, including Mulan magnolia, Purple magnolia, Red magnolia, Lily magnolia, Tulip magnolia and Woody-orchid) is a small tree native to southwest China (Sichuan, Yunnan), but cultivated for centuries elsewhere in China and also Japan. It was first introduced to English-speaking countries from cultivated Japanese origins, and is thus also sometimes called "Japanese magnolia", though it is not native to Japan. It is now also planted as an ornamental in North America and Europe, though rather less often than its popular hybrid (see below). The name Yulania liliiflora is a synonym.