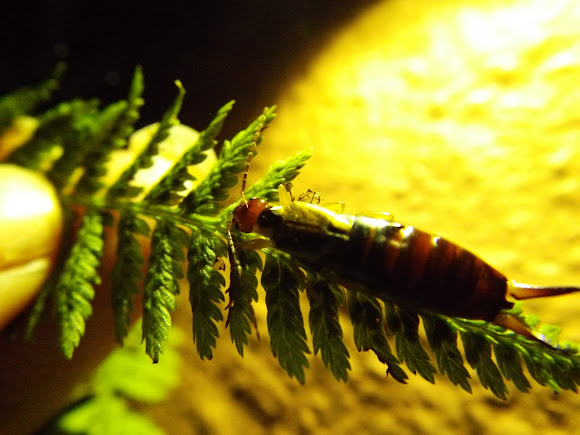 Forficula auricularia has an elongated flattened brownish colored body,[2] with a shield-shaped pronotum,[3] two pairs of wings and a pair of forcep-like cerci.[4] They are about 12–15 mm long. The second tarsal segment is lobed, extending distally below the third tarsal segment.[5] The antenna consists of 11–14 segments, and the mouth parts are of the chewing type.[2] Adult males are polymorphic in body weight and head width, as well as cercus length and width.[6] The male forceps are very robust and broadened basally with crenulate teeth.[7] The female forceps are about 3 mm long, and are less robust and straighter. The cerci are used during mating, feeding, and self-defense. Females also have tegmina of about 2 mm in length. Third instar or older nymphs that have lost one branch of cerci are capable of regenerating it in form of a straight structure. Males with asymmetrical forceps are called gynandromorphs or hermaphrodites because they resemble females.[8]

Native to Europe, western Asia and probably North Africa,[9][10] Forficula auricularia was introduced to North America in the early twentieth century and is currently spread throughout much of the continent.[7] In North America, European earwigs comprise two sibling species, which are reproductively isolated.[11] Populations in cold continental climates mostly have one clutch per year, forming species A,[12] whereas those in warmer climates have two clutches per year, forming species B.[11][13] European earwigs are most commonly found in temperate climates, since they were originally discovered in the Palearctic region, and are most active when the daily temperature has minimal fluctuation.[1][14