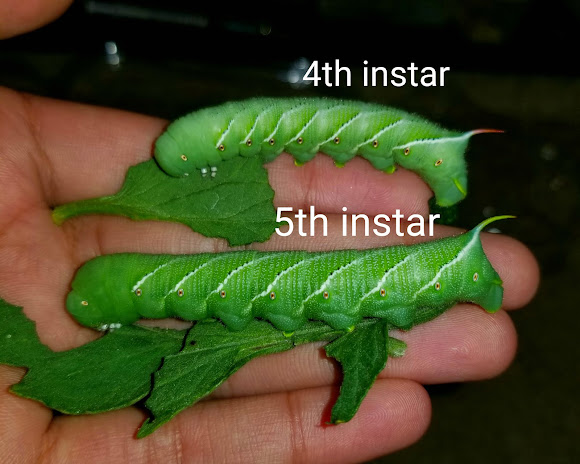 These caterpillars are being raised by me (originally caught in the wild) due to the low survival rate in the wild because of parasitoid wasps. These caterpillars moved from a tomatillo plant, to some tomato plants, most likely because of the amount of predators on that side of the yard. These caterpillars neon green, with some red and white designs, and stripes, which grow up to 70 millimeters in length. As of now the larger caterpillar on my hand is pupating in the soil I provided. These caterpillars are killed in mass numbers, and considered 'pests' just because they have a big appetite, but really pests should be only invasive (non-native) species in my opinion. One way I can conserve, is to rear as much as I can indoors, to prevent caterpillar fatalities.

In my garden, Fort Worth, Texas. Actually found these guys in the night, while doing a Mercury vapor moth sheet.

Adult Manduca sexta have narrow wings with a wing span of approximately 100 mm. Manduca sexta moths are nectarivorous and feed on flowers, demonstrating a remarkable ability to hover. Adults are sexually dimorphic. Males are identifiable by their broader antennae and the presence of claspers at the end of the abdomen. Female moths are typically ready to mate one week after eclosion, and do so only once. Males may mate many times. Mating generally occurs on a vertical surface at night, and can last several hours, with the male and female facing in opposite positions, their posterior ends touching. After mating, females deposit their fertilized eggs on foliage, usually on the underside of leaves. They have horns on the end of the larvae body, to protect itself from predators.

Cool Saturniidae. Thanks for sharing.