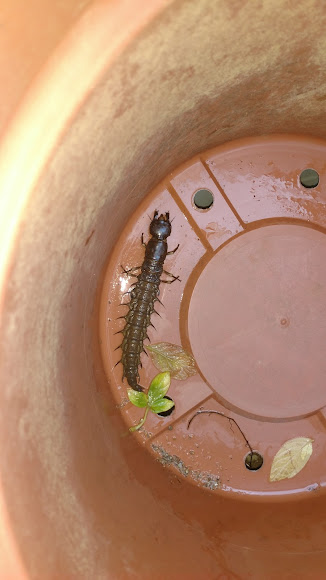 Dobsonflies and fishflies have complete metamorphosis. After hatching from eggs, young dobsonflies and fishflies live underwater for several years before coming to land to pupate. The pupal stage lasts for the winter and spring, after which the winged-adults emerge. The adults typically live for only a few days, just long enough to mate and lay eggs.

Dobsonflies and fishflies live most of their lives in the larval stage, often 2 or 3 years. Larval dobsonflies and fishflies, often called "hellgrammites", are large, worm-like, aquatic predators that live under rocks and logs in streams. They feed on minnows, tadpoles, insects, and other aquatic prey. Hellgrammites require very clean, unpolluted water to live. Most adult dobsonflies and fishflies do not feed at all. PEST STATUS Dobsonflies and fishflies are not considered pests. Dobsonfly and fishfly adults are a challenge to find because they are only around for a few weeks each year. Look on rocks and logs near streams in the early summer. Hellgrammites can usually be found under rocks year round in clean, fast-flowing streams. Look out, because they can bite! They are slow-moving, however, and will usually remain still for a photograph if they are not touched. DOBSONFLY FACTS Although they are not as sensitive to pollution as stoneflies and mayflies, hellgrammites still need clean water to live. Fisherman once commonly used hellgrammites as fish bait, but polluted streams have made hellgrammites less common. Scientists can tell how polluted a stream is based on what aquatic insect species are present.

Spotted by
Jessica and Lily Mueller