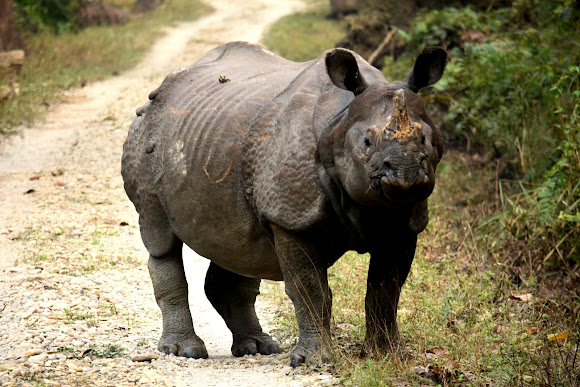 Rhinos inhabit the alluvial flood-plain vegetation of sub-tropical climates where water and green grass is available all year. Many rhinos now live within blocks of the suitable rhino habitat in CNP. Rhinos occurred in highest densities along the flood plain grasslands and riverine forests bordering the Rapti, Narayani, Reu, and Dhungre rivers, suggesting that floodplain grasslands dominated by 4-6 m tall Saccharum spontanium are the single most critical habitat (Dinerstein and Price, 1991). Grasslands interspersed with patches of riverine forests together make about 30% of the park area and have Saccharum spp., Narenga spp., and Themeda spp . (Shrestha, 1995). This grass species is the fundamental food resource of rhinos comprising more than 60% of the animal diet. Due to the flood and vegetation succession, the grassland may have decreased. Sal Shorea robusta forest associated with species such as Dillennia pentagyna, Syzigium cumini, Trijuga oleofera, Lagerstromia parviflora, Terminalia tomentosa, T. bellerica, and Phyllanthus emblica comprise 70% of the park area and are seldom eaten by rhinos. Inundation by regular flooding of the alluvial plains along major rivers creates conditions favorable for the quick appearance of sprouts and germination to maintain the dominance of Saccharum spontaneum . This makes the monsoon flood very critical for maintaining rhino habitat. Oxbow lakes and other open water bodies are also important because the rhino spends about 8 hours in a day in wallows or streams during high humidity periods (August-September). In December and January, they spend at least an average of a day wallowing (Laurie, 1978).

Hello Dhiren and welcome to the Project Noah community!
Nice first spotting!
Project Noah is a tool for people to learn about wildlife, share wildlife spotting's, build nature journals and engage in citizen science. Here you will find a friendly community of people passionate about wildlife and conservation.