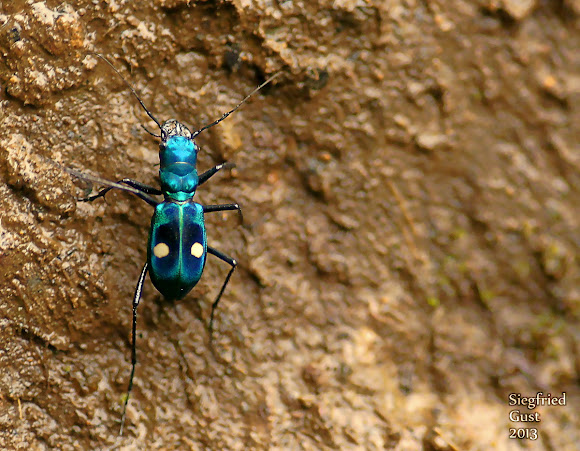 Found on the Rio Celeste Trail in Tenorio Volcano National Park. I would classify it as cloud forest,

This little guy was so colorful that I had to get a picture. But he (or she, no idea) was fast and would not sit still for a moment. I was following it around snapping shots in "machine gun" mode hoping to get something usable for about 15 minutes till I finally felt kind of strange with people walking by staring at the weirdo with the camera chasing a little beetle around. A higher resolution version can e seen at https://www.flickr.com/photos/66454855@N...

Nice spotting and enjoyable description of how you got the shot - those tiger beetles can indeed move fast!

Long live the weirdos with the camera! It's because of them (us) we have such stunning photos of the marvels mother nature has. Images that might be the basis of the conservation of less flamboyant species.