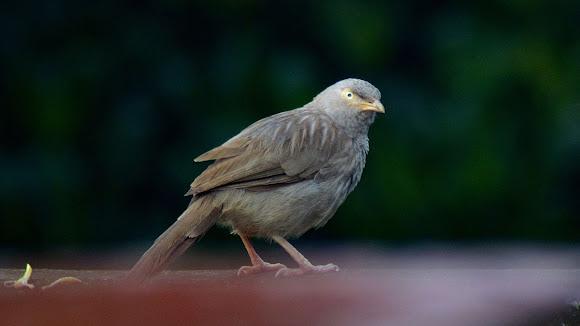 The Yellow-billed Babbler or White-headed Babbler (Turdoides affinis) is a member of the Leiothrichidae family endemic to southern India and Sri Lanka. The Yellow-billed Babbler is a common resident breeding bird in Sri Lanka and southern India. Its habitat is scrub, cultivation and garden land. This species, like most babblers, is not migratory, and has short rounded wings and a weak flight and is usually seen calling and foraging in groups. It is often mistaken for the Jungle Babbler, whose range overlaps in parts of southern India, although it has a distinctive call and tends to be found in more vegetated habitats.[2] Its name is also confused with T. leucocephala, which is also known as White-headed Babbler.