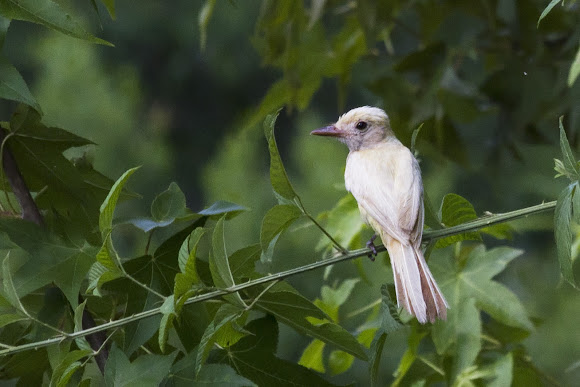 The Great Crested Flycatcher is a common Spring and Summer resident throughout much of the eastern North America, spending the winters in the neotropics. Their calls are regularly heard, but the birds prefer to remain hidden in treetop canopies. As their name implies, they are predominantly insect feeders and often snatch bugs in mid air, leaping from a perch and returning momentarily. They are well-known for their unique choices of nesting material; often man-made materials, but snakesins are a popular addition. I had the pleasure of observing and photographing this juvenile briefly right beside the Southeastern Natural Sciences Campus at Phinizy Swamp Nature Park.

Leucism is an uncommon plumage abnormality caused by a genetic mutation. Melanin and other pigment cannot form and as a result the bird's feathers are pale. Leucism is similar to albinism, but differs in that the bird still retains some ability to form pigment and the eyes and/or legs are generally the same color as a typical bird. Partially leucistic birds, like this Great Crested Flycatcher, will still show some vague coloration or will have random white patches on the plumage. Fully leucistic birds will be all white but with typical-colored eyes and/or legs and feet.

What happened to him and Jakubko?