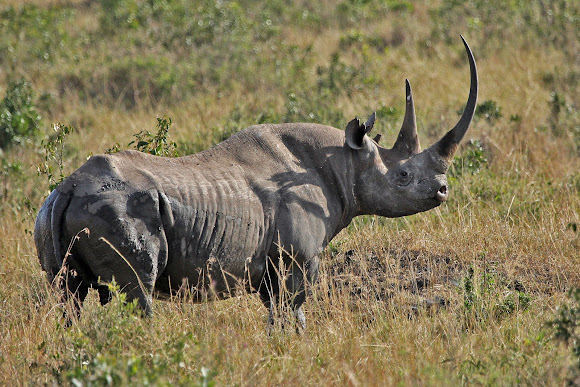 The black or hook-lipped rhinoceros is listed as critically endangered by the IUCN Red List. Its populations have been severely affected by poaching for its horn and one subspecies, the western black rhinoceros, has gone extinct because of it. There are 4,880 individuals left in the world. While it used to cover most of East Africa, an early influx of poaching by the first European settlers started its decline. It is known as the hook-lipped rhinoceros due to its prehensile upper lip.

Grassland-woodland transition territories. This individual was spotted just by a river; if you look closely at the first pictures, you can see that it seems to be striped through the middle-- it just came out from wallowing in the mud.

This individual is the largest on the Masai Mara. Nicknamed 'Karambe' by the local Masai tribes that patrol and regulate the area, its ear has been notched to keep track of it. Its horn must have been well over two meters long-- the biggest found on any rhinoceros on the Masai Mara. It's easy to see why this particular rhinoceros might be a target for poachers (the location is very, very not exact).

It is. For more information on rhinoceroses, see my post on them: http://somewhereupatree.wordpress.com/20....

It's a shame that there are so few of those left, in this world.

Thank you armadeus.4 and Dilan Chaturanga

A big, belated congratulations on your SOTD duttagupta35504!!! Very well-deserved :)

Great spotting duttagupta35504,congrats on the very well derserved SOTD and thanks for sharing

Thank you so much Kira M. DanielePralong, it is just an honor to be considered among all those amazing SOTDs I've seen in the past year and a half.

And thank you Benno Ibold.

Thank you SukanyaDatta and Reza!

What a wonderful choice for an SotD, Congratulations Dutta !

OH. MY. GOD.
Thank you so, so, so, so much!!!!!! This is such a huge honor for me. I joined Project Noah around one and a half years ago and it never ceases to amaze me!!
Thank you Sigg and AshleyT! It is often the most beautiful that makes the most fragile...

SG in CR 7 years ago

A well deserved Spotting of the Day.

woow amazing animal!! but is so sad that this make him vulnerable