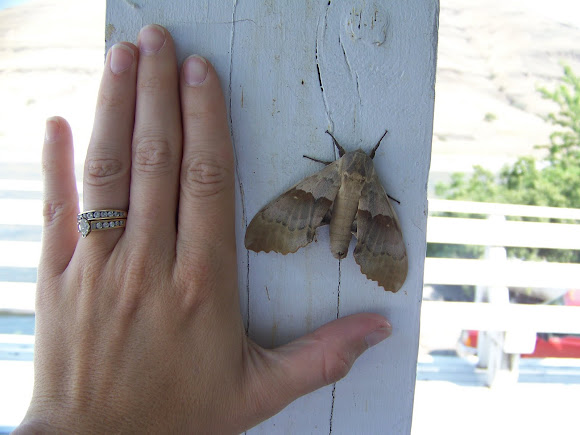 The One-eyed Sphinx or Cerisy's Sphinx (Smerinthus cerisyi) is a moth of the Sphingidae family. It is known from south-eastern Alaska, the southern parts of all Canadian provinces and in the northern border states of the United States south into northern Indiana, Pennsylvania and Ohio and along the west coast to southern California, eastward to the Rocky Mountains and into western New Mexico north to western North Dakota. It has also been recorded from Illinois and as far south as Missouri.[2]

Found along the Snake River. In the Lower Hells Canyon region. Just a few miles from Asotin Washington, Clarkston Washington, Lewiston Idaho, area. This was found on an old abandoned restaurant peer on the river. We found this moth, and two others, at the same time. The other two where not alive and in a bush not far from this one.

If I have ID'd this wrong, please let me know. Thanks :)

May also be Pachysphinx modesta; not quite sure... Very pretty, though! :)