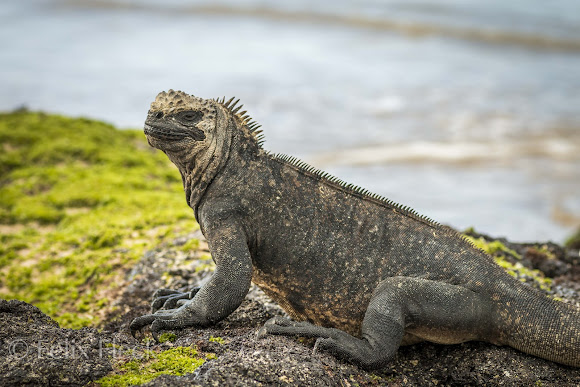 This specimen measured around 30cm, excluding the tail. Dark grey in colour with some pale irregular markings. A spiny crest runs down from the neck. The dark colouration allows these iguanas to quickly absorb heat. This is an important part of its evolution, as it feeds in the relatively cold waters around the islands. It has adapted to dive in order to feed on algae that grow on submerged rocks. Not all Marine Iguanas dive, though. Females and smaller males tend to feed in the intertidal zone, at low tide.

Found on rocks at the beach near Puerto Villamil. Usually large groups can be seen basking on the black volcanic rock.

These Iguanas can be found all over the Galápagos Islands, to which they are endemic. A 2017 taxonomic review now recognizes 11 subspecies, and although protected, the species is considered vulnerable. http://www.iucnredlist.org/details/1086/...

Thanks for the nice words, Zlatan.