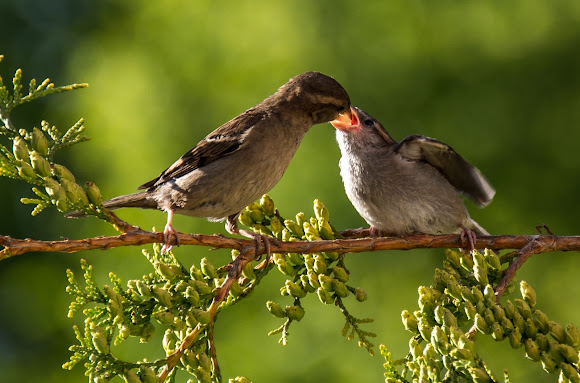 The house sparrow was among the first animals to be given a scientific name in the modern system of biological classification, since it was described by Carl Linnaeus, in the 1758 10th edition of Systema Naturae. It was described from a type specimen collected in Sweden, with the name Fringilla domestica. Later the genus name Fringilla came to be used only for the common chaffinch and its relatives, and the house sparrow has usually been placed in the genus Passer created by French zoologist Mathurin Jacques Brisson in 1760.

Unmated males start nest construction and call particularly frequently to attract females. Males may try to mate with females while calling or displaying. In response, a female will adopt a threatening posture and attack a male before flying away, pursued by the male. The male displays in front of her, attracting other males, who also pursue and display to the female. This group display usually does not immediately result in copulations. When finally choosing a partner, the house sparrow is monogamous, and typically mates for life. However, birds from pairs often engage in extra-pair copulations, so about 15% of house sparrow fledglings are unrelated to their mother's mate. In the third photo, secon from the left is a Eurasian tree sparrow (Passer montanus).