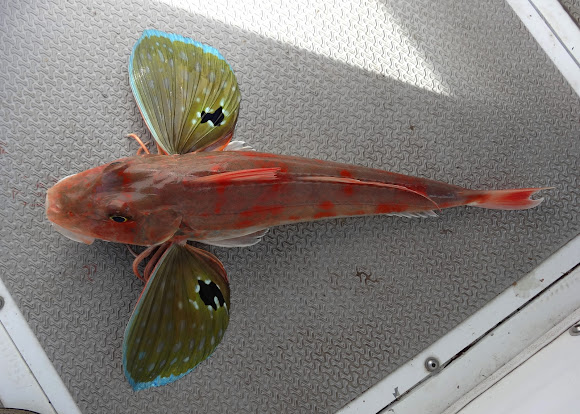 Also known as the Blue-fin Gurnard. This bottom dwelling species grows up to 65cm but average about 40cm like this one. Generally light pink with darker orange/red blotches, these fish are able to change their body colour from very pale to a deep red. They have remarkable pectoral fins that are very broad and brightly coloured green with a blue border, white flecks and a large black dot. When threatened these fins are spread and its thought the black dots look like eyes that might deter a potential predator.

Found on sandy sea bed, from shallow estuaries to open water down to 150-200m depth. This specimen found in the Firth of Thames in the North Island of New Zealand in about 30m of water.

These fish have finger-like fins under the pectoral fins used for both 'walking' along the sea bed and for disturbing the sand to locate its prey. I would also note that this fish was released unharmed after these images were taken.

Thank you Polilla and Pradeep for you comments. Sorry for the lateness of my response. I am pleased you liked this guy.

Thank you Gilma. Its hard to find good underwater images of this species as it lives generally quite deep with poor light and in an environment that most divers/photographers dont tend to visit. That said it just goes to show that even the most plain environments can produce astonishing results!

That is a beautiful fish, It almost looks like he could fly with those gorgeous fins....Thank you for sharing, triggsturner.

Thanks ChunXingWong, In fact the whole family of these fish are amazing. It has to be said that my friends get annoyed with me when we go fishing as I have a policy of catch and release everything I catch, these days.

This is an amazing-looking fish!
Great to hear that it is released unharmed.