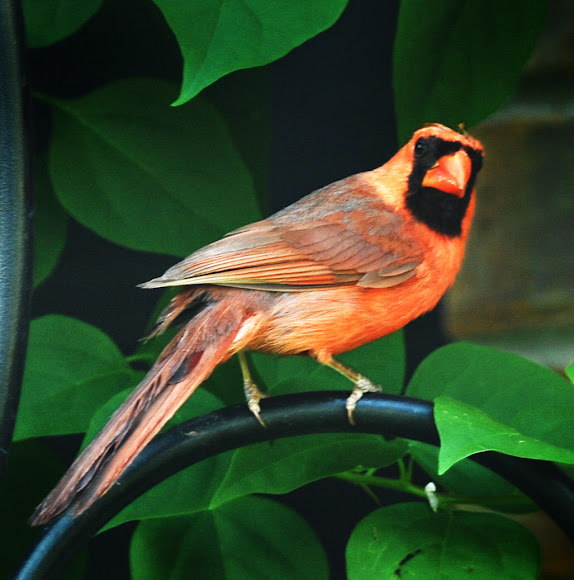 This attractive and colorful species of bird is small, with a body length of approximately 8 1/2 inches, while the wingspan can approach 12 inches. Male northern cardinals are one of the most recognizable birds in the state, with an overall bright red coloration with a large black mask that runs from the reddish cone-shaped beak through the eyes. It also has a black patch that extends from the base of the beak onto the throat area. Females, while attractive in their own right, are much more subdued in their coloration than are the males. Typically, females have a grayish olive dorsal area with golden brown under-parts and head. The only red coloration on the females is the red bill, a scattering of reddish feathers on the wings and tail and the red tip on the crest of the head. Cardinals are commonly seen while foraging for food while in bushes, trees or occasionally on the ground. They feed on a variety of smaller animals including insects and even snails, as well as an assortment of fruits, grains and seeds. Many are heard before they are actually seen when they make their metallic “cheep” while flying from lookout point to lookout point. Their flight pattern consists of and up-and-down flight with rapidly beating wings. These birds typically prefer to live a solitary life during the spring, summer, and fall months. However, during the winter, they occasionally will form flocks together or even join in flocks with other species to forage for food. They will also pair up during the breeding season, with the male and female remaining monogamous during such time. The male will feed the female as he vies for her attention during courtship, as well as while she is incubating the eggs. The eggs are bluish or greenish with dots of purple and brown, numbering three to four per brood, and are laid in a nest consisting of grass, strips of bark, leaves, grass, and even hair. Incubation time is only twelve to thirteen days, and the young are unable to take care of themselves at hatching. Both sexes will feed them during the next week and a half as they learn to fly, and males have been known to tend for the young while the female begins to incubate a new set of eggs. Up to four broods are produced in a season. Cardinals are a common to abundant bird throughout their range in Texas. They are not bashful birds, and many will utilize bird feeders in the yard. Attract them with birdseed, cracked corn and sunflower seeds. They are also apt to bathe in birdbaths when provided.

Susan, I did not see the 3rd shot...that is really neat!

thanks Heather...I have problem shooting it too but I am still not happy with my shot...maybe later I will have a better shot for you.

Beautiful Picture! I can never seem to get good crisp photos of the male cardinals. They are restless in my neck of the woods right now.