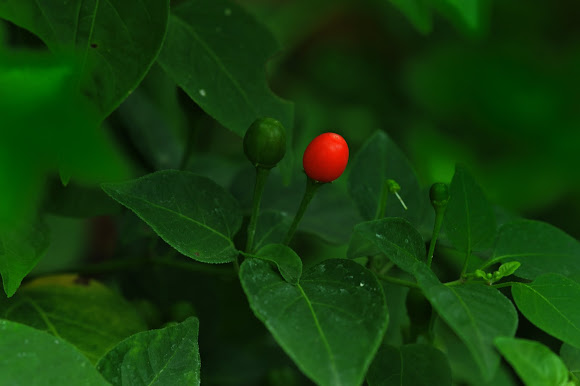 Chiltepin is a shrub that usually grows to a height of around 1 m (3.3 ft), but sometimes reaches 3 m (9.8 ft). The tiny chile peppers of C. a. var. glabriusculum are red to orange-red, ellipsoidal, and about 0.8 cm (0.31 in) in diameter. Tepin is derived from a Nahuatl word meaning "flea". Tepin peppers, or "bird’s eye" or simply "bird" peppers (due to their consumption and spread by wild birds), are extremely hot, measuring between 50,000 and 100,000 Scoville Units. Some chile enthusiasts argue that the Tepin is hotter than the habanero or Red Savina, but this is supported with the so-called Craig Dremann score rather than the standard scale of a pepper's intensity, which is the Scoville score. In Mexico, the heat of the Chiltepin is called arrebatado ("rapid" or "violent"), because, while the heat is intense, it is not very enduring. This stands in contrast to the Chili Piquin, which is somewhat similar in size and shape to the Chiltepin, but delivers a decidedly different experience. Piquins are not as hot as Chiltepins (only about 30,000-50,000 Scoville Units), but they have a much slower and longer-lasting effect.

native to southern North America and northern South America. C. a. var. glabriusculum can be found in Texas, Arizona, and Florida in the Southern United States, the Bahamas, the Caribbean, Mexico, Central America, and Colombia.[1] It prefers well-drained soils, such as silty or sandy loams, and 800–2,000 mm (31–79 in) of annual precipitation in Puerto Rico. It may be found in areas with a broken forest canopy or disturbed areas that lack tree cover if moisture and soil are favorable. Elsewhere, such as in Arizona, it may require the partial shading of a nurse plant.

this is mother of all peppers. the mocking birds love them. this is from my garden. Chiltepin was named "the official native pepper of Texas" in 1997, two years after the Jalapeño became the official pepper of Texas. Family: Solanaceae Genus: Capsicum Species: C. annuum Variety: C. a. var. glabriusculum