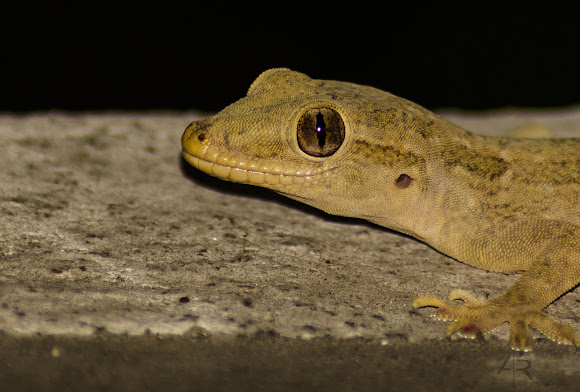 Like many geckos, this species can lose its tail when alarmed. Its call or chirp rather resembles the sound "gecko, gecko". However, this is an interpretation, and the sound may also be described as "tchak tchak tchak" (often sounded three times in sequence).

Most geckos are nocturnal, hiding during the day and foraging for insects at night. They can be seen climbing walls of houses and other buildings in search of insects attracted to porch lights, hence their name "house gecko". Spread around the world by ships, these geckos are now common in the Deep South of the United States, large parts of tropical and sub-tropical Australia, and many other countries in South and Central America, Africa, South Asia, and the Middle East. In winter time, in a lot of these climates, they are known for going into a state of brumation in order to withstand the cold. They grow to a length of between 75–150 mm (3–6 in), and live for about 5 years. These small geckos are non-venomous and harmless to humans. Medium to large geckos may bite if distressed; however, their bite is gentle and will not pierce skin. A tropical gecko, Hemidactylus frenatus thrives in warm, humid areas where it can crawl around on rotting wood in search of the insects it eats. The animal is very adaptable and may prey on insects and spiders, displacing other reptiles.