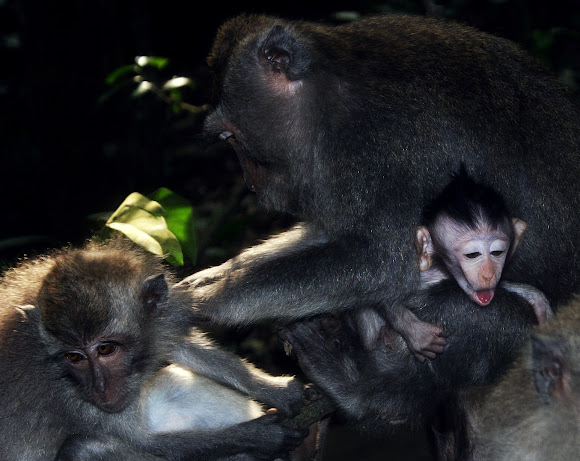 Macaca fascicularis is a very social animal that lives in groups of 5–60 or more animals. These are multi-male groups, normally containing 2–5 males and 2–3 times as many females. The number of immature is usually comparable to the number of females. Group size often depends on the level of predation and availability of food. Groups are female-centred, as the females are philopatric (i.e. remain in one place across generations), while the males move in and out of these female-based groups. Males generally first emigrate from their natal group at the age of 4–6.

The crab-eating macaque is found in a wide variety of habitats, including primary lowland rainforests, disturbed and secondary rainforests, and riverine and coastal forests of nipa palm and mangrove. They also easily adjust to human settlements; they are considered sacred at some Hindu temples and on some small islands, but a pest around farms and villages. Typically they prefer disturbed habitats and forest periphery. The native range of this species includes most of mainland Southeast Asia, and the Maritime Southeast Asia islands of Sumatra, Java, and Borneo, offshore islands, the islands of the Philippines, and the Nicobar Islands in the Bay of Bengal.

Grooming Sessions are pretty important as they solidify the bond between the pack and family members.