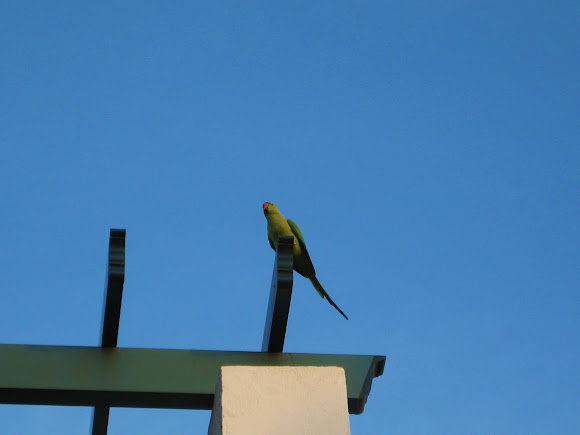 The Rose-ringed Parakeet, also known as the Ringnecked Parakeet, is a gregarious tropical parakeet species that has an extremely large range. Rose-ringed parakeets measure on average 40 cm (16 in) in length including the tail feathers. Their average single wing length is about 15–17.5 cm (5.9–6.9 in). The tail accounts for a large portion of their total length. In the wild, Rose-ringed parakeets usually feed on buds, fruits, vegetables, nuts, berries and seeds. Wild flocks also fly several miles to forage in farmlands and orchards causing extensive damage.

The Rose-ringed Parakeet has established feral populations in India, a number of European cities, South Africa and Japan. There are also apparently stable populations in the USA (Florida, California and Hawaii) and a small self-sustaining population in Tunis, Tunisia, and Tehran, Iran (concentrated in the north side of the city). They are also found throughout Lebanon, Israel, UAE, Bahrain, Qatar, and Oman. There are a small number of escaped birds in Australia. This non-migrating species is one of few parrot species that have successfully adapted to living in 'disturbed habitats', and in that way withstood the onslaught of urbanisation and deforestation. In the wild, this is a noisy species with an unmistakable squawking call.

Both males and females have the ability to mimic human speech. First it listens to its surroundings, and then it copies the voice of the human speaker. Some people hand-raise Rose-ringed parakeet chicks for this purpose. Such parrots then become quite tame and receptive to learning. They can also show emotions similar to human beings and adjust easily to family life.

In Spain we call it 'Cotorra de Kramer', It is an invader species

Its must be Psittacula krameri