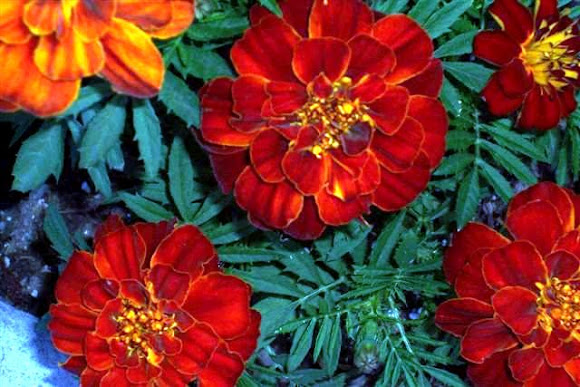 This flower is of spiritual importance in some parts of the world and is said to have influence the intellect. Throughout the World as an Agricultural Aid: This disease preventing aspect of the Marigold in agriculture is the main reason why our orange beauty is also grown along side food plants like potatoes and tomatoes throughout the world. In effect, marigold is a natural insecticide, fungicide and nematode killer all in one. Ahhhh! The wondrous Marigold! A Star of the Day of the Dead Celebration: In the Mexican celebration of the Day of the Dead—Dia de los Muertos—the marigold plays a central role because of its association with death. Marigolds are used in the Day of the Dead alters in Mexico because the ancient Aztecs used to commemorate their dead with the orange marigold (called the cempasúchil by the Aztecs). So to this day, you will see Mexicans creating large orange ornamented alters to those loved ones that have passed.

Emma, we call it Zendu or Genda phool in India.

This flower has high spiritual importance in India. It is believed that it has the power to influence the intellect!!

Thank you Alice and Heather!

Thanks again p.young!!
Usually marigold are grown around vegetable patches to keep rabbits away.

Wow my favorite marigolds! So pretty!