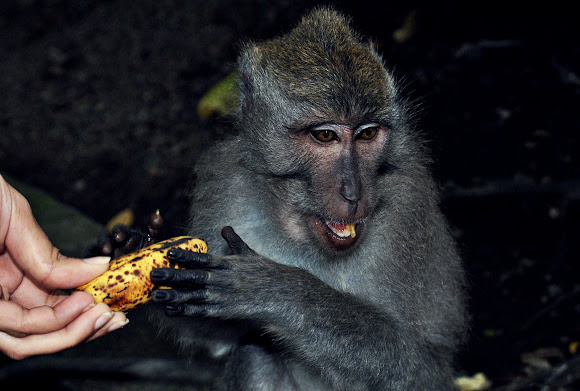 It is often referred to as the long-tailed macaque because its tail is usually about the same length as its body and because its long tail distinguishes it from most other macaques. The species is also commonly known as the crab-eating macaque because they are often seen foraging beaches for crabs. Another common name for M. fascicularis is the cynomolgus monkey, which literally means "dog-milker" monkey; this is the name most commonly used in laboratory settings. In Indonesia, M. fascicularis and other macaque species are known generically as kera, possibly because of the high-pitched alarm calls they give when in danger ("krra! krra!").

maybe!!! but they are quite smart creatures!!!!

the banana was the trade for the shot :-)