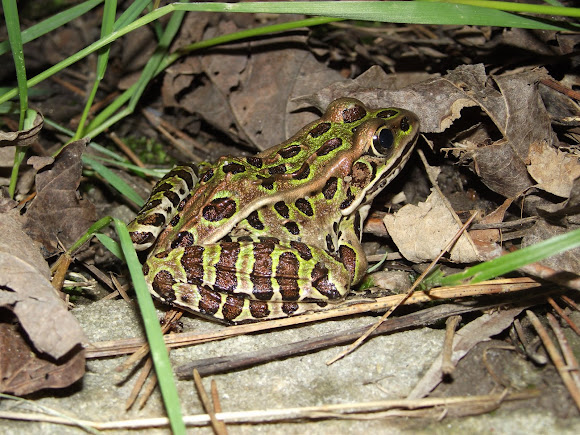 The Northern Leopard Frog is a fairly large species of frog reaching about 11 centimeters (4.3 inches) in length. It varies from green to brown in dorsal colour with large dark circular spots on its back, sides and legs. Each spot is normally bordered by a lighter ring. A pair of dorsolateral folds starting from the back of the eye run parallel to each other down the back. These dorsolateral folds are often lighter or occasionally pinkish in colour. There is also a pale stripe running from the nostril, under the eye and tympanum, terminating at the shoulder. The ventral surface is white or pale green. The iris is golden and toes are webbed. Tadpoles are dark brown or grey, with light blotches on the underside. The tail is pale tan.

The Northern Leopard Frog (Rana pipiens) is a species of leopard frog from the true frog family, native to parts of Canada and United States. It is the state amphibian of Minnesota and Vermont.

Northern Leopard Frogs have a wide range of habitats. They are found in permanent ponds, swamps, marshes and slow moving streams throughout forest, open and urban areas. They normally inhabit water bodies with abundant aquatic vegetation. They are well adapted to cold and can be found above 3,000 m (9,800 ft) asl. Males make a short snore-like call from water during spring and summer. The northern leopard frog breeds in the spring (March–June). Up to 6500 eggs are laid in water, and tadpoles complete development within the breeding pond. Tadpoles are light brown with black spots, and development takes 70–110 days, depending on conditions. Metamorph frogs are 2–3 cm (0.79–1.2 in) and resemble the adult. This species was once quite common through parts of western Canada until declines started occurring during the 1970s. The population decline is thought to have been caused by pollution drift from the United States falling in the form of acid rain. Many populations of Northern Leopard Frogs have not yet recovered from these declines. Northern Leopard Frogs are preyed upon by many different animals such as snakes, raccoons, other frogs and even humans. They do not produce distasteful skin secretions and rely on speed to evade predation. They eat a wide variety of animals including crickets, flies, worms, and smaller frogs. Using their large mouths, they can even swallow birds and garter snakes. This species is similar to the Pickerel frog (Rana palustris) and the Southern Leopard Frog (Rana sphenocephala).