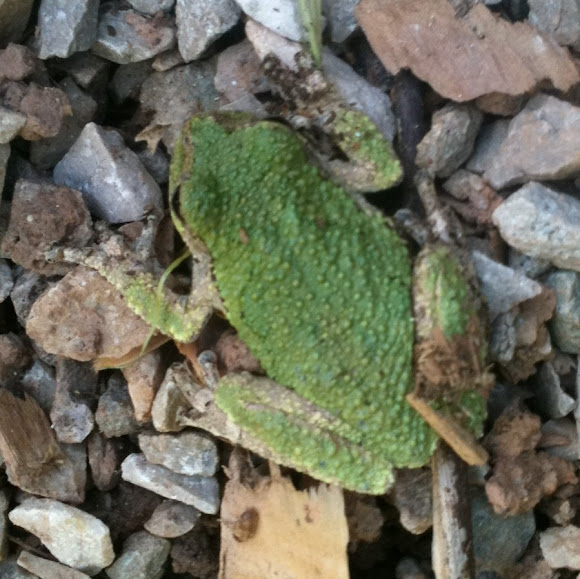 Cope's gray tree frog (Hyla chrysoscelis) is a species of tree frog found in the United States. It is almost indistinguishable from the gray tree frog, Hyla versicolor, and shares much of its geographic range. Both species are variable in color, mottled gray to gray-green, resembling the bark of trees. These are tree frogs of woodland habitats, though they will sometimes travel into more open areas to reach a breeding pond. The only readily noticeable difference between the two species is the call — Cope's has a faster-paced and slightly higher-pitched call than H. versicolor. In addition, H. chrysoscelis is reported to be slightly smaller, more arboreal, and more tolerant of dry conditions than H. versicolor.[1] The range of H. chrysoscelis is more southerly; it is apparently the species found in the lower elevation Piedmont and Coastal Plain of Virginia and the Carolinas. In those areas, H. versicolor may be present only in the Appalachians.[1] The bird-voiced tree frog, H. avivoca, is similar to H. chrysoscelis/ and H. versicolor, but is smaller (25–50 mm in length vs 32–62 mm for the gray tree frog).

These two species are visually indistinguishable and are both in your area, so this is as good as the identification can get