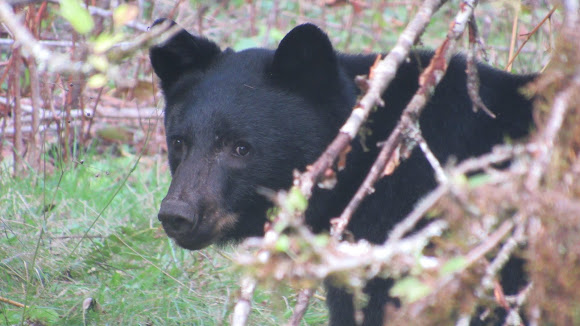 From WDFW: Despite their name, black bears may be a variety of colors, including black, brown, blond, cinnamon, and rust. Black or brown, with a light brown snout, is the most common coloration. On average, black bears in the Western U.S. weigh 100-300 pounds, with males larger than females. They stand approximately 2.5-3 feet at the shoulder when standing on all fours, and about 5 feet when standing upright. When on all fours, the black bear's rump is higher than its shoulders. The black bear's face profile is straight, with a relatively long muzzle and long, prominent ears.

From WDFW: Black bears are common throughout Washington except for the non-forested areas of the Columbia basin. Black bears live in a diverse array of forested habitats in the state, from coastal rainforests to the dry woodlands of the Cascades’ eastern slopes. In general, black bears are strongly associated with forest cover, but they do occasionally use relatively open country, such as clearcuts and the fringes of other open habitat.

This bear ate my goat, although my goat was likely initially killed by a cougar. The bear finished my goat off, and then feasted on my apples, until he became food for humans. It's the circle of life - a beautiful sadness.