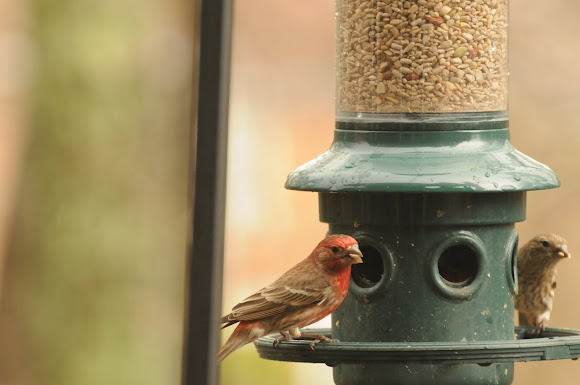 Adults have a long, square-tipped brown tail and are a brown or dull-brown color across the back with some shading into deep gray on the wing feathers. Breast and belly feathers may be streaked; the flanks usually are. In most cases, adult males' heads, necks and shoulders are reddish.[3][4] This color sometimes extends to the stomach and down the back, between the wings. Male coloration varies in intensity with the seasons and is derived from the berries and fruits in its diet.[5][6] As a result, the colors range from pale straw-yellow through bright orange (both rare) to deep, intense red. Adult females have brown upperparts and streaked underparts. Their song is a rapid, cheery warble or a variety of chirps.[7]

These birds are mainly permanent residents; some eastern birds migrate south.[8] Their breeding habitat is urban and suburban areas in the East as well as various semi-open areas in the West from southern Canada to northern Florida[6] and the Mexican state of Oaxaca; the population in central Chiapas may be descended from escaped cagebirds.[4] Originally only a resident of Mexico and the southwestern United States, they were introduced to eastern North America in the 1940s. The birds were sold illegally in New York City[6] as "Hollywood Finches", a marketing artifice.[5] To avoid prosecution under the Migratory Bird Treaty Act of 1918, vendors and owners released the birds. They have become naturalized; in some unforested areas, they have displaced the native Purple Finch and non-native House Sparrow.[9] In 1870, or before, they were introduced into Hawaii.[10]

This pair visited the bird feeder as a pair several times.

i love these birds!!