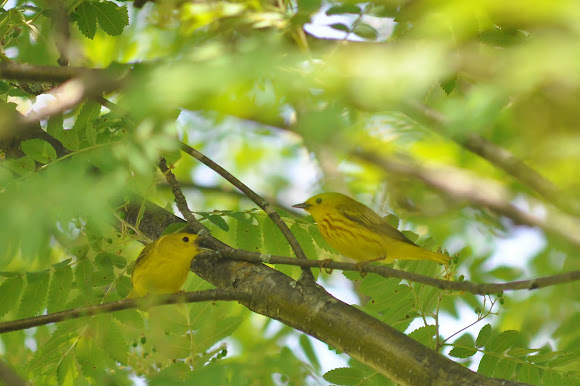 A bright yellow with dashes of charcoal in the wings, about the size of a pear. Cornell: Although many warblers are yellow, the Yellow Warbler is the most extensively yellow of any species. This widespread species of willows and mangroves is the only warbler with yellow tail spots.

Sitting in a fieldside apple tree. EOL: Yellow warblers spend the majority of the year throughout much of North America, including Alaska, northern Canada, and the northern 2/3 of the United States. A highly migratory bird, Dendroica petechia winters in southern California, southern Florida, and south through the Brazilian Amazon, Bolivia, and Peru.

"The Yellow Warbler is a bit of feathered sunshine. In his plumes dwells the gold of the sun, in his voice its brightness of good cheer. We have not to seek him in the depths of the forest, the haunt of nearly all his congeners, he comes to us and makes his home near ours." Frank Michler Chapman, "The Warblers of North America" http://is.gd/asmYpw

How amazing to think they flew all the way from Central America, or even further....