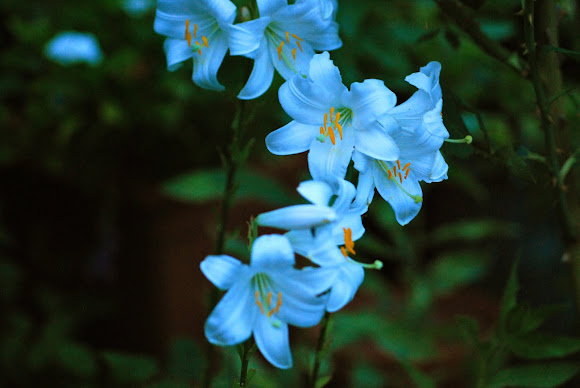 is a plant in the genus Lilium, one of the true lilies. It is native to the Balkans and West Asia. It forms bulbs at ground level, and unlike other lilies, has a basal rosette of leaves through the winter, which die back in summer. A leafy flower stem, typically up to 1.2 m high, sometimes up to 2 m high, emerges in late spring and bears fragrant flowers in summer. Flowers are white, flushed yellow at the base. These are very special plants. The older they get, the more flowers they produce. The Madonna Lily symbolizes purity for Roman Catholics. Medieval depictions of the Blessed Virgin Mary often show her holding these flowers. There are translations of the Bible that identify the Hebrew word Shoshannah as 'lily' in Song of Songs ("As the lily among thorns, so is my love among the daughters." Song of Songs 2:2 (KJV)), not as a rose as is customary to translate. For example, Abraham ibn Ezra describes it as a white flower, which has a good fragrance, and has a six-petal flower and six stamens. But its identity is uncertain, because it does not fit with the description as "the lily of the valleys", because mostly it grows in the mountains.

my other Madona Lily spotting: http://www.projectnoah.org/spottings/642...

thanks, oh they have a lovely scent, very strong...

Monkey mind this is one of my favourite pic!!

Spotted by
monkey-mind and nana-puppet