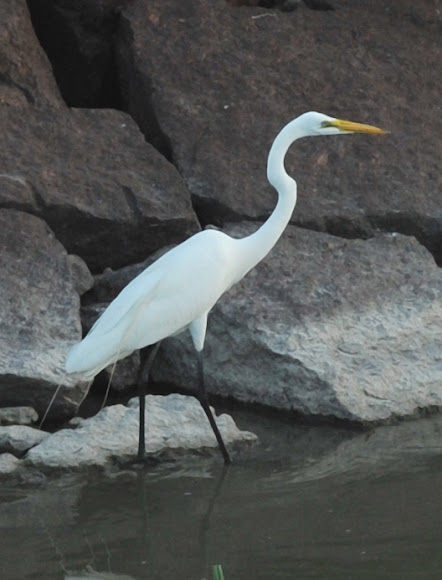 found this egret at george bush reservoir along the buffalo bayou, houston looking for food. Great Egret can be distinguished from other white egrets by its yellow bill and black legs and feet, though the bill may become darker and the lower legs lighter in the breeding season. In breeding plumage, delicate ornamental feathers are borne on the back. Males and females are identical in appearance; juveniles look like non-breeding adults. It is a common species, usually easily seen. It has a slow flight, with its neck retracted. This is characteristic of herons and bitterns, and distinguishes them from storks, cranes, ibises, and spoonbills, which extend their necks in flight. The Great Egret is not normally a vocal bird; at breeding colonies, however, it often gives a loud croaking cuk cuk cuk.

Great Egret is partially migratory, with northern hemisphere birds moving south from areas with colder winters. It breeds in colonies in trees close to large lakes with reed beds or other extensive wetlands. It builds a bulky stick nest. The Great Egret feeds in shallow water or drier habitats, feeding mainly on fish, frogs, small mammals, and occasionally small reptiles and insects, spearing them with its long, sharp bill most of the time by standing still and allowing the prey to come within its striking distance of its bill which it uses as a spear. It will often wait motionless for prey, or slowly stalk its victim.

Hi birdlady...can you tell me which is which so I can post them separately. thanks

Hi! I see that you have a Snowy Egret and a Great Egret on the same spotting. Lovely photos!!

@ Alice: did i just post both a great white and a snowy egret? one with yellow feet w/ black beak and one with black feet w/ yellow beak. I shot two egrets at different location on the same bayou.