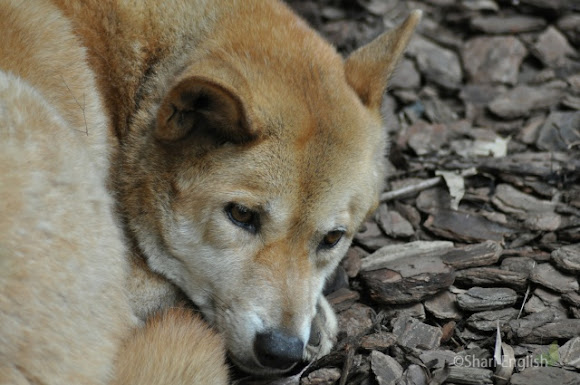 The Dingo is Australia's largest native carnivore. Originally from Asia, the dingo was introduced into Australia around 3500-4000 years ago. The dingo is a pack animal but can also be found alone. Colours can range from white through to honey-ginger to black and tan. They have a large bushy tail with a scent gland at the base. Have been known to breed with domestic dogs. Status: Common

Dingos are found in a variety of habitats including dry grassland, through woodland to rainforest in ranges and foothills surrounding city limits. Can be found Australia wide except for Tasmania.

This Dingo was spotted at Australia Zoo on the Sunshine Coast. I caught him napping but I wasn't sneaky enough and he slowly woke up.