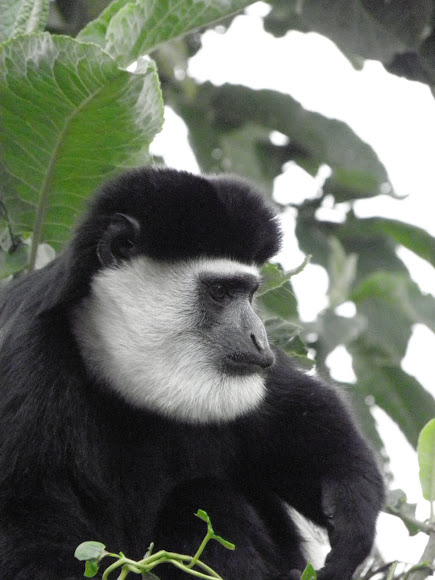 Cape of white hair over their shoulders and long lionesque white tail contrast with black body. Troops usually headed by dominant male, but in this case there was not one in sight. The biggest monkey was a female

Mostly arboreal, we were delighted to have the oldest female go to ground near us and then she moved into a different tree from the others and watched. The young ones were playing on an aerial next to the lodge

We were able to watch them for almost an hour - the staff told us they rarely come to the lodge. We saw some later as we were driving from Mt Kenya toward Samburu. Might have been the same troop, as we were only a few miles away

I did not reload it. Just woke to it working this morning. I did however, try multiple times to load at first. The image wouldn't show, or it would stall out at 50% give or take, but then I had several duplicates which I deleted. The weird thing was I had a blank "image 1" and 4 additonal images, and seem to be missing my initial image which is of a colubus descending from the tree: my favorite shot

Hi Karen, did you upload it again? Let us know if you keep having problems in the future.