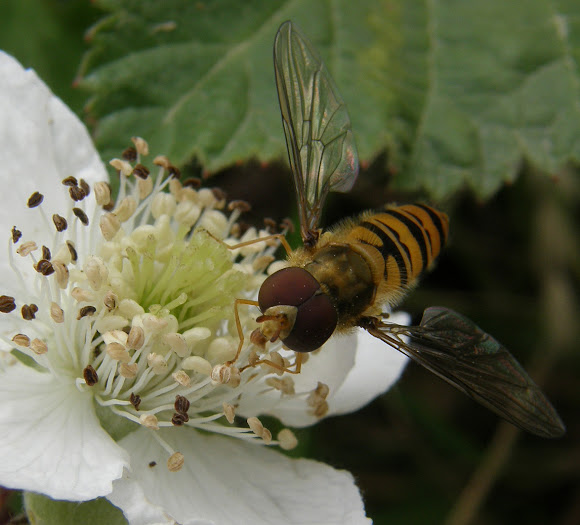 Iis a relatively small hoverfly (9–12 mm) of the Syrphidae family, widespread throughout all continents. Like most other hoverflies it mimics a much more dangerous insect, the solitary wasp, though it is a quite harmless species. The upper side of the abdomen is patterned with orange and black bands. Two further identification characters are the presence of secondary black bands on the 3rd and 4th dorsal plates and of faint greyish longitudinal stripes on the thorax. As in most other hoverflies, males can be easily identified by their holoptic eyes, i.e., left and right compound eyes touching at the top of the head.

E. balteatus can be found throughout the year in various habitats, including urban gardens, visiting flowers for pollen and nectar. They often form dense migratory swarms, which may cause panic among people for its resemblance to wasps. It is among the very few species of flies capable of crushing pollen grains and feeding on them. The larva is terrestrial and feeds on aphids.