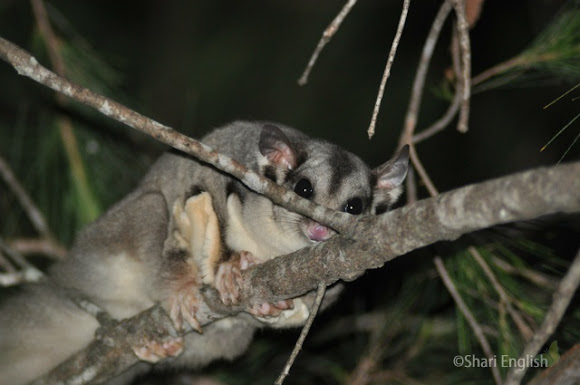 Similar to the Sugar glider only larger. The body is light grey with a dark stripe on the head and the back. They have a creamy white underbelly and white cheek markings. The prehensile tail is long and fluffy with a black tip. They have large ears and protruding eyes adapted for an active night lifestyle. Between the hands and feet is a flap of skin which is the gliding membrane that allows them to glide (not fly) between trees. These nocturnal creatures are very agile and can glide up to 50m between trees. They use their sharp incisor teeth to make gashes in the bark of acacia and eucalypt trees to lap the sap. They are highly social and live in family groups of around 8 individuals. Males have a scent gland on their forehead which they use to mark territory.

Dry sclerophyll forests and woodlands where tree hollows are abundant.

oh awesome I didn't know there was a marsupial one, I will definitely add this and all my marsupial spottings. thanks!

Shari.. Please consider adding you marsupial spotting to the "Marsupials of the World" mission at http://www.projectnoah.org/missions/8445......
Great shot by the way!

No I'm fairly sure their only relatives outside of Australia are in PNG. Thank-you Steve but he was a lovely subject I just got him on camera =). I volunteer with the Queensland Glider Network and we often go on spotlighting trips but the little gliders are usually to quick to capture on camera! I do agree they are one of our cutest species, I have a real soft spot for the sugar gliders though.

@alice, pretty sure they are not related to rocky or bullwinkle. These gliders are marsupial. Pretty cute (and another great pic Shari)

I wonder if they are related to our flying squirrels.