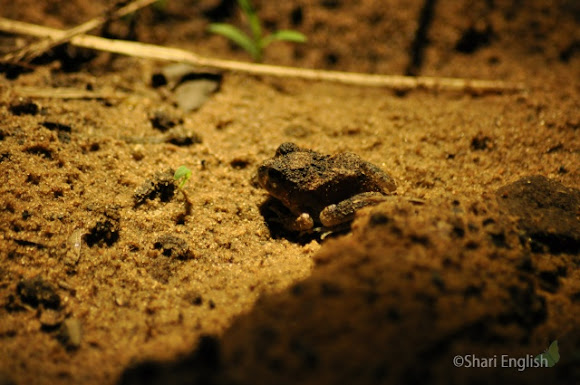 Often confused with the introduced Cane Toad and killed because of it. Back is smooth or finely granular with short irregular skin fold and small, orange-tipped warts. Back colour is grey, brown and reddish-brown, plain or almost bi-coloured with pale patches. Belly is smooth white. Generally hides during the day in a burrow using its spade like pads on its hind feet to dig into the ground, shuffling its hind limbs and gradually pushing itself backwards into the soil.

Lives in lowland alluvial or sandy soils in drier habitats including woodland, grassland and disturbed areas as well as rainforest and wet schlerophyll forests of the coast and tablelands. Found in northern and eastern Australia.

Spotted this little guy during a spotlight in White Rock Conservation Park in Ipswich. He was a very small one and sat in the middle of the track for a long time. Lots of frogs out on this night as it was slightly rainy.