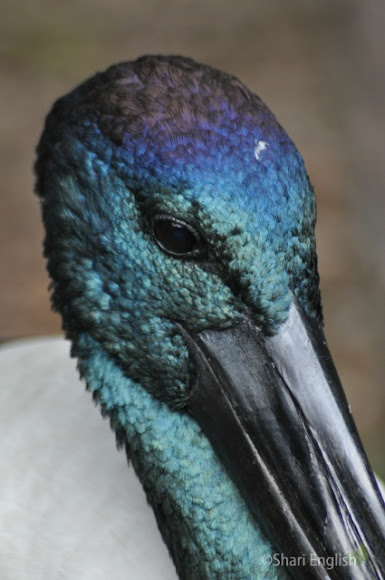 Also known as the Jabiru, it is one of Australia's largest birds. It is a tall stork with a large black beak, the head, neck, and parts of the back and wings of this bird are iridescent shimmering with a green-blue-purple sheen and the rest of the bird is white. The legs are long and orange. Females of the species have bright yellow eyes and the males are brown-black. Juveniles are brown. Uses its sharp beak when stalking in shallow ponds to spear prey.

This pair of Jabiru were spotted at Australia Zoo on the Sunshine Coast, QLD. A very beautiful bird with such beautiful colouring, and I love the piercing yellow eyes of the female.