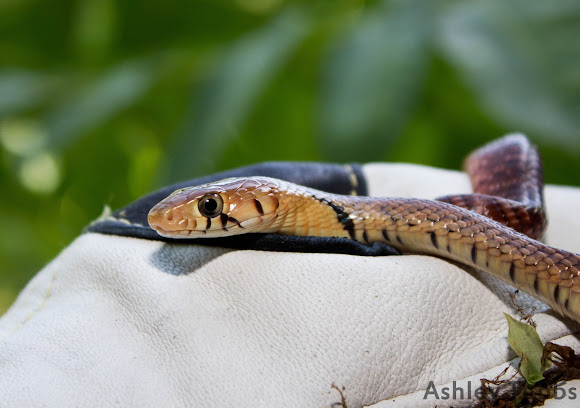 Beautiful snake that is golden colored on the head, then fades to red in the middle of the body and then again fades to black on the tail. There are diagnostic black marks on the face and neck. While herping in a new place I made sure to bring welding gloves so I can grab small stuff even when I don't know what it is :) I knew this wasn't a venomous snake when I picked it up, but wasn't sure if it was rear-fanged or not (they are slightly venomous). Checked the guide later and ID him, perfectly harmless. Though as adults they can have a nasty bite since they get giant (record is over 3 m).

Crossed the sidewalk in front of me after walking back from breakfast at my resort one morning. Jungle on both sides of the road. I barely got to him in time to actually grab him. He had gone in a hole next to a small tree, and I was able to just grab his tail. While holding onto the tail, I put the glove on my other hand, and his head came out of another hole. So I let go of his tail and grabbed him as he came out of the hole. I felt really good about having the glove on since I wasn't sure what he was and he was just chewing away on the glove. He eventually calmed down and just let me hold him. Released him back the way he was headed after getting many weird looks from staff and other tourists at the resort :)