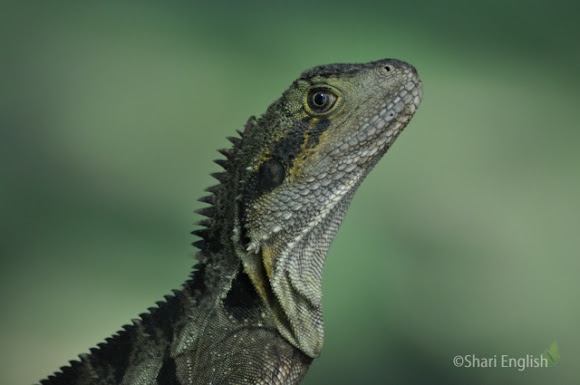 A yellowish/brown lizard with dark bands on its back and face. Yellow stripes on the face and around the eye. The belly has a dull red colouring which is much brighter in males. The body has a crest of spines that run from the neck to the tail tip. The tail is very long and can grow up to 80cm which is much larger than the body which can grow to 23cm. Males are much larger than females.

Native to Australia, very abundant along creeks, rivers, and drains, as well as in urban parks and gardens and even in the city. Found perching on rocks, logs or tree branches along the edge of waterways.

This dragon was spotted at Minnippi Parklands in Brisbane. When I lived in Brisbane I visited this park very often to photograph the abundant wildlife out there, this guy was such a poser!

Thank you everyone! This is one of my favourite pictures, this little guy was such a model he just posed and stood there for ages not worried one bit =) when I get some spare time I will edit the details of the spotting, share some more information. Thanks again I am very honoured =)

Great Shot Shari. Always enjoy seeing something I have not seen before

"Eastern Water Dragons are semi-aquatic lizards that can remain submerged underwater for up to half an hour."