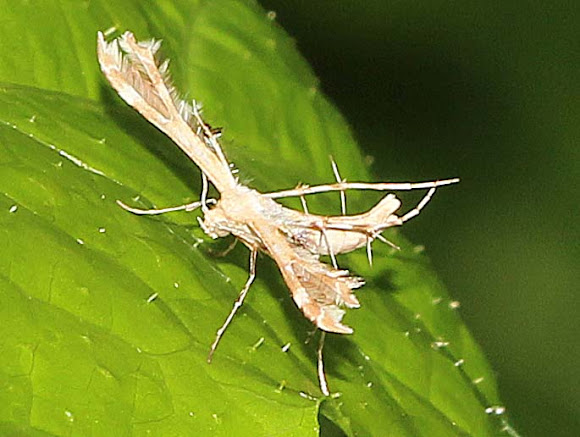 Pterophoridae; Pterophorinae; Sphenarches anisodactylus (Walker, 1864) This Pterophorid appears to me to be coloured in an extremely light shade of beige to the point of being almost white. Then it has some almost imperceptible very pale brown markings, pretty much all over. Additionally, there are darker brown patches on the 'feathery' fringes of the wings. Wikipedia does not appear to have much information on this species, but states the following about the Family: Pterophoridae. "The Pterophoridae or plume moths are a family of Lepidoptera with unusually modified wings. Though they belong to the Apoditrysia like the larger moths and the butterflies, unlike these they are tiny and were formerly included among the assemblage called 'microlepidoptera'. "

This S. anisodactylus was spotted in a dense tangle of weeds on an uncultivated patch of ground adjacent to the rice crop. This ground had formerly been part of the rice field, but was too much under the shade of some Mango Trees to produce a decent crop. So it was allowed to grow wild. It seems to attract numerous species of moths and other insects.