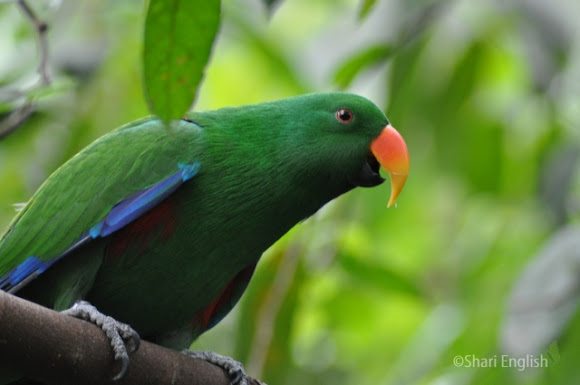 A stocky parrot that is especially interesting due to the extreme sexual dimorphism of the male and female colours. The male plumage is electric green with red flanks and blue on the wing edge, they had a red eye and and orange/yellow bill. The female is a crimson red with blue on the underside, they have a yellow eye and a black bill. Can grow up to about 35cm with a short stock tail. They are a very nosy parrot and live in small flocks. They feed mainly on fruit figs and flowers.

Found in Northern Australia rainforests as well as rainforests in Solomon, New Guinea and Indonesia as well as other nearby islands. Lives in rainforests, but can also be found in eucalypt woodlands that join areas of rainforest. Usually found very high up in the forest canopy.

This is a captive bird spotted in a free flight aviary at Australia Zoo on the Sunshine Coast, QLD. I was lucky enough to be able to volunteer with these guys at the wildlife hospital and they have such loud personalities, getting up close to them allows you to appreciate their beautiful plumage. This one is a beautiful male.

Thanks, these birds have such funny, LOUD personalities!

I love these birds. I am lucky to see them fairly often although always on the fly! Your photo features a male. The females, unusually for many birds, are also spectacularly coloured (red & blue).