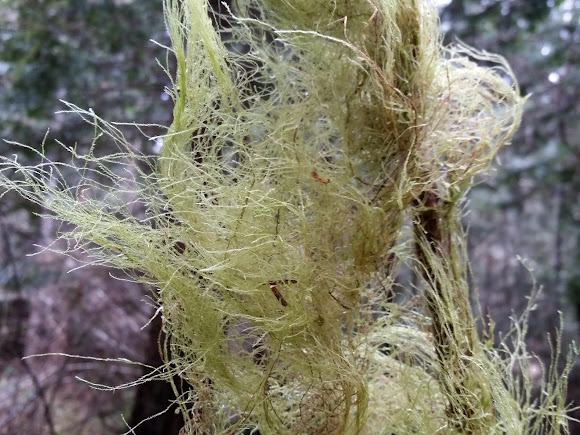 Alectoria sarmentosa is a long-lived, perennial lichen. It is also sometimes classified as a fungus. It is a light greenish colored and fruticose or bushy bodied. This epiphytic lichen belonging to the Alectoriaceae family and the suborder Lecanorineae, which includes six similar species.[1] A. sarmentosa grows draped or strung over conifer tree limbs and deciduous shrub branches in Northern temperate rainforest. This lichen favors mature and old growth, wet conifer and hardwood forests with clean air.[2] A. sarmentosa is sensitive to air pollution and used for air quality monitoring.[3] Areas required by A. sarmentosa are found in northern and southern temperate zones and receive high rainfall.[4] This lichen is commonly found in transitional areas between valley and mountainous forests, but usually avoiding the immediate coast. The common name for A. sarmentosa is witch’s hair lichen. This common name is used for most Alectoria species. A similar-looking species commonly confused with A. sarmentosa is Usnea longissima. These lichens are similar in color and growth patterns but A. sarmentosa lacks a central chord that characterizes the genus Usnea.[5][6]-Wikipedia

Alectoria sarmentosa ranges throughout northern hemisphere temperate rainforests. These rainforests are located in the temperate zone and receive high rainfall. They receive 846mm (minimum) to 5,600mm (maximum) annual precipitation.[18] Alectoria Ach. species and subspecies have a global range and are found in Pacific Northwest Coast forests, including Alaska, Coastal British Columbia, Oregon, Washington, and northern California, west of Alberta and Montana. It also has been identified in the Appalachian Mountains temperate rainforest of Eastern U.S. and Boreal rainforests of New Brunswick and Nova Scotia Canada, as well as Scandinavian coastal conifer forests. It is common in boreal or taiga forests and prehumid rainforests. Usually found at transitions between valley and mountain forests, low to mid elevations. Avoiding the immediate coast.

Alectoria sarmentosa is commonly associated with old growth forests in these regions.[19] This lichen is very dependent on forest structure (Canopy height cover and composition), edge characteristics and climate.[20] It dominates canopy gaps edges, where sunlight reaches the lower to mid levels of the forest canopy.[21][22] In these areas of old growth A. sarmentosa grows on bark and wood; found pendulously draped over branches of conifer trees, hardwood trees and deciduous shrubs. It is rarely found growing on rock or mosses over rock. It is sSometimes seen on ground due to fragmentation by wind.