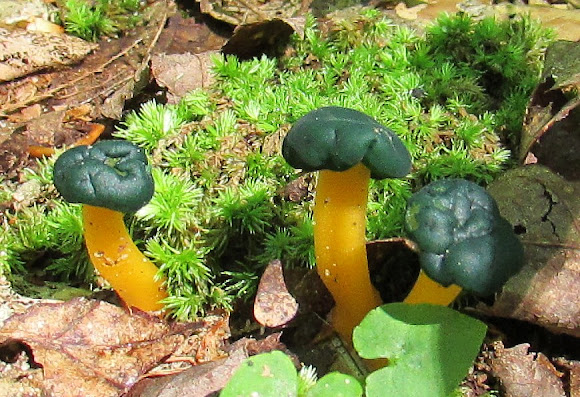 Two to two-and-a-half inches ( 4 - 5 cm) tall, growing in loose clusters. Stalk was 5-6 mm. in diameter. Some specimens had dark green caps, though many had not yet changed to this color. The images show the variety of coloration in this group.

Forest floor of wet, deciduous woods. Often found growing out of mosses or close to mosses.

It is possible the the yellow-headed specimens in two of the photos are a separate species, Leotia lubrica, although the close proximity of these fungi here hints that they may be conspecific. (Note the green-headed specimens in the background of the second photo.) There is some question, and much analysis directed, as to what are the species boundaries for this genus of fungi.

What a lovely find- so lucky ! Thanks for sharing Doren. Great spotting & info.