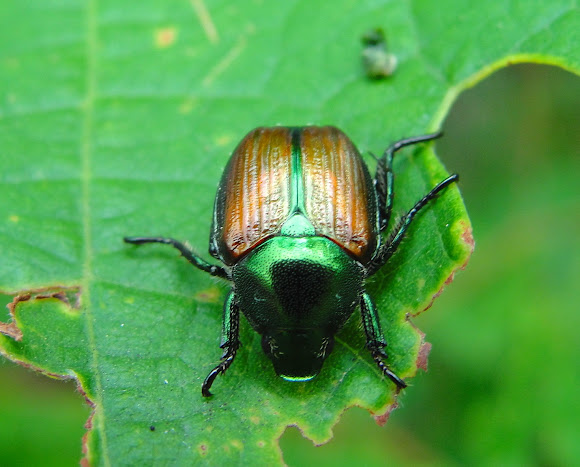 The Japanese beetle is often considered an attractive insect. It is generally metallic green with coppery-brown wing covers, which do not quite cover the tip of the abdomen. Along the sides are five patches of whitish hairs. The adult beetle has an oval form and ranges from 8 to 12 mm in length. Typical of other scarab beetles, the antennae are clubbed at the end and may spread to a fan-like form. Adults feed on leaves and flowers of many plants including rose, bean, grape, and crabapple. Feeding injuries to leaves usually result in conspicuous ‘skeletonizing injuries’ where larger veins are avoided leaving a lacy “skeleton” of the leaf. Larvae chew roots of turfgrasses and it is the most important white grub pest of turfgrass in much of the northeastern quadrant of the United States.

They are only harmful to plants ;)

They used to be like RUN FOR YOUR LIFE ITS A JAPANESE BEETLE!!!! And we would.

No they dont bite, they have little spines on their legs that may gently scratch you but they dont hurt they are harmless.

I used to be scared of these as a kid. Do they bite? People acted like they do!