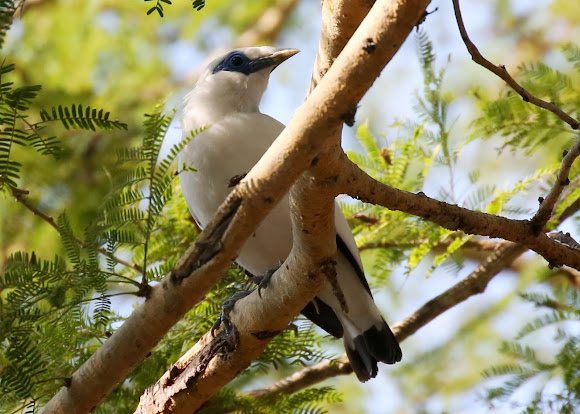 Known by several names including Bali Mynah and Rothschild Mynah, this critically endangered bird is hard to miss in the forest. A medium sized starling at 25cm long. Mainly pure white with black wing and tail tips. Area of bright blue skin around the face and eye and a flowing white crest. Bill is yellow/grey and legs are grey. Images show wild, non-ringed birds in native forest.

The only vertebrate endemic species left on the Island of Bali in Indonesia. Although released at several sights the only viable breeding wild population seems to be in the north of the island. (A programme of released birds on the offshore island of Nusa Penida has since failed.) Found on forest edges and savannah, it is usually seen high in the canopy and rarely on the ground. Please note that exact coordinates and location have been modified in accordance with PN policy on critically endangered organisms.

This species has an incredible story. Wild populations dipped to an all time low of an estimated 6 birds in 2001. The last survey in December 2016 counted 87 individuals in the wild. The biggest threat being bird poaching where these birds command a very high price and are seen as status symbols for their owners. Captive breeding has been carried out for years now and young birds released into the wild. These birds dont always acclimatize well and some dont breed and many are re caught by poachers. To help with this, a new incentive has been introduced where bird breeders can get a license to breed and sell birds legally but must give 10% of the young they breed to the programme. This way more birds are being re introduced and legally sold birds take the sting out of the poached bird market. Not an ideal solution but one that may yet see this beautiful bird recover. Ref: Ethics Bali Starling Rehabilitation, ICUN Leucopsar rothschildi

Thank you again Rach for your comments and support.

Another excellent SOTD, well done. It's great to see the less well-known species getting profiled, especially being able to highlight the excellent programmes being undertaken to protect these endangered birds and other species

Thanks for the comment Jim. My observations in Indonesia leave me feeling that the conservationists there are up against it all the time. The people involved in this programme to try and get this beautiful bird back into the wild certainly have my respect.

Still around in spite of 'Us'. Excellent spotting and summary, Rob. Maybe your attention to this will in some way help it along...this bird needs it!

My pleasure to share this story with you all Liana and thank you for your comment and support. It is much appreciated :)

Thank you for sharing this amazing spotting of a very beautiful bird Rob. I agree with remkinloch's comment about how humans have this need to possess eveything...it's just horrible. Like you said, the current solution is not ideal but at least someone is trying which is nice to know. Congratulations, very well deserved :)

Thank you again Polilla and also to ForestDragon for your comments and support.

Thank you so much for sharing this wonderful find!

Thank you Daniele. I wasn't sure anyone had really noticed these guys so am happily suprised and honoured. The story behind the hopeful recovery of this species is what fascinated me and how a little 'out of the box' thinking can effect the outcome positively when a more traditional approach was getting nowhere. Thank you again.

Congratulations Robert on bringing this incredible sighting and the story of these birds to Project Noah! It is our Spotting of the Day:

"This rare sighting of wild Bali starlings (Leucopsar rothschildi) is our Spotting of the Day! Bali's only endemic vertebrate, this critically endangered species currently has only about 100 adults in the wild in 3 locations. From the IUCN: "This stunning starling qualifies as Critically Endangered because it has an extremely small range and a tiny population which is still suffering from illegal poaching for the cagebird trade. Releases of captive-bred birds have boosted the population, but it is uncertain how many of these have yet bred successfully in the wild". As for all critically endangered organisms on Project Noah exact coordinates and location have been modified.
http://buff.ly/2qlpQj8".

Thank you Polilla and Rach for you comments and support. I think it's important to note that while this bird nearly went extinct in the wild there are still hundreds in captivity around the world. Two of the biggest problems are 1, repatriation of caged birds to get them feeding and breeding for themselves and 2, the risk of creating slight genetic variations from using caged birds. ( similar to something like eye colour in zebra finches from caged birds to wild birds.)

What a beautiful creature - far removed from what you would expect from a 'normal' starling or Mynah. Quite stunning. Such a shame how humankind feel the need to 'possess' everything. They look to be quite quizical birds and very engaging to photograph. Very pleasing to hear they are hopefully on the brink of a comeback

Thank you Polilla for your comment. Despite the odds I think this bird will make it.