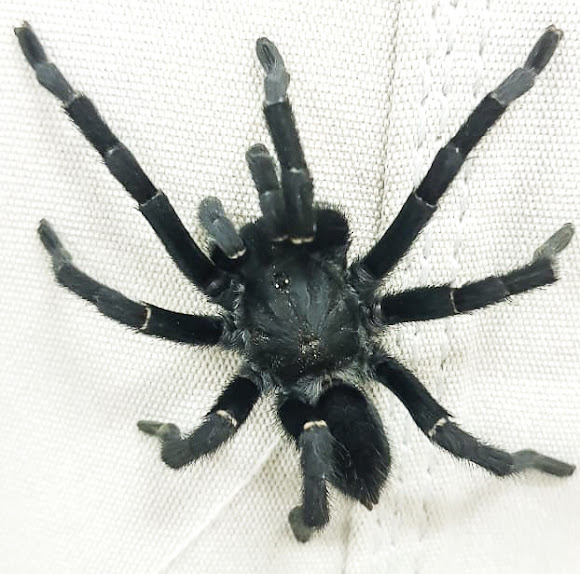 A common babbon spider ruffly the size of a womans fist was found inhabiting a property being maintained by my sister in law who is a property developer. Generously hairy with a distinctive dark colour, legs of equal width throughout their length and two foot pads at the end of each. Here in Africa, new world tarantulas are refered to as baboon spiders or old world tarantulas. They carry a mild neurtoxic venom but only lightfoots lesser baboon spider (not pictured) found here in the Western and South Western Cape is dangerous to Humans. Like huntsman spiders but to a greater degree, babboons have a powerful, muscular bite with large sharp fangs. As a result bites are not fatal but are extremely painful and lead to secondary symptoms from extreme stress or fear in the victim such as nausea, high blood pressure and hightened adrenalin or 'flight or flight'. Boboons are non aggresive however and only attack if provoked or hunting prey.

Semi Arid Sandy conditions where it lives in burrows. After reaching maturity after 10 years males leave their burrows and go in search of females which is a likly reason for finding this one out ion the open.we were able to safely relocated this one out into more rural conditions.

A sad reality is these spiders are rare. They can live for up to 20 years and alot of animal hobbiest make them pets, especially our very beautiful golden starburst Baboon spider. Along with the IUCN which has classified them as Commercially Threatened, three species within South Africa are designated Protected Invertebrate Animals. This restriction prohibits the collection or keeping of these creatures without a permit.