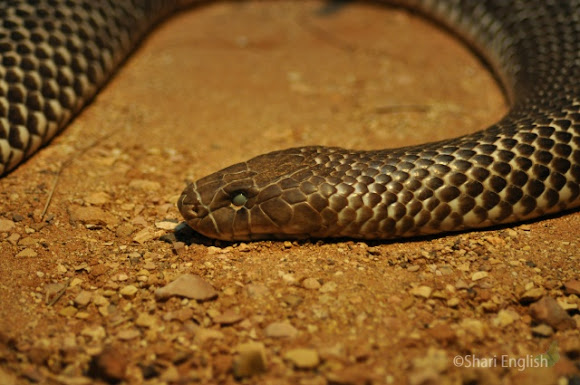 Also known as the King Brown Snake it is Australia's second largest venomous land snake. Dangerously venomous, it produces large amounts of venom, more than any other Australian snake, that destroys red blood cells, breaks down muscle tissue and also affects blood clotting properties. The Mulga snake can grow to about 2.5m, brown to reddish-brown or olive-brown, often with a net like pattern and the belly is white to cream.

Most habitats from monsoon forests to hummock grasslands, shrub-lands, gibber and sandy deserts. Often found in dry woodlands, and occurs in highly disturbed areas such as wheat fields.

This angry looking snake was spotted at Australia Zoo on the Sunshine Coast in Queensland. The current blue colour on the eye suggests it is near time to shed its skin. You can just tell by looking at it that its a very mean and dangerous snake. Still however a beautiful and fascinating creature.

Yes I definitely recommend it, in my eyes it is the best one around =) They already expanded the car park awhile ago but its good the business is getting enough visitors =) while you are there I also recommend you pop over and visit the wildlife hospital, its just on the other side of the parking lot over the bridge last time I was there they were doing $2 sneak peaks tours but you can get a full tour for some more definitely worth it, wonderful place and full of beautiful koalas unfortunately but they will melt your heart =)

Well... there is always next time! I hope they build a bigger parking lot! I was not the only one that turned around! I am at the Sunshine Coast every few weeks.. I will try again! It is a nice Park and the work they are doing is fantastic!

that's ok =) no I was volunteering at the wildlife hospital there though for 2 years but I moved to go to uni and now its too far away =( I'm glad it was busy there though they had been experiencing reduced visitor numbers but its unfortunate that you couldn't go in. Maleny is beautiful though!

Are you working at the Australian Zoo? Sorry.. did not read the note!!! I was there 2 weeks ago but I could not find a parking spot so I went to Marleny..

Yes he is, I think I might have mentioned this in my notes, but he was about to shed and he was very angry because of it. Often snakes become aggressive at shedding because of the clouding in there eyes they cannot see as well and are more defensive.

This snake is just before skinning.. The eyes are clouded!