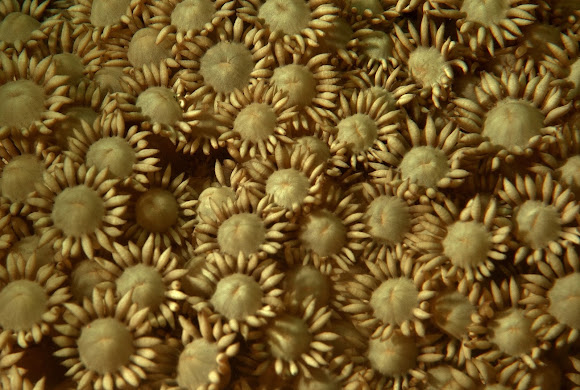 The Alcyonacea, or soft corals, are an order of corals which do not produce calcium carbonate skeletons. Soft corals contain minute, spiny skeletal elements called sclerites, useful in species identification. Sclerites give these corals some degree of support and give their flesh a spiky, grainy texture that deters predators. In the past soft corals were thought to be unable to lay new foundations for future corals, but recent findings suggest that colonies of the leather-coral genus Sinularia are able to cement sclerites and consolidate them at their base into alcyonarian spiculite, thus making them reef builders. Unlike stony corals, most soft corals thrive in nutrient-rich waters with less intense light. Almost all utilize symbiotic photosynthesizing zooxanthella as a major energy source. However, most will readily eat any free floating food, such as zooplankton, out of the water column. They are integral members of the reef ecosystem and provide habitat for fish, snails, algae and a diversity of other marine species.

Soft corals are like the plants and flowers in the ocean. There are several thousand variety of them and they can be very colorful.

Thanks, @Marta :)\
They are actually quite small, less than 1 cm each