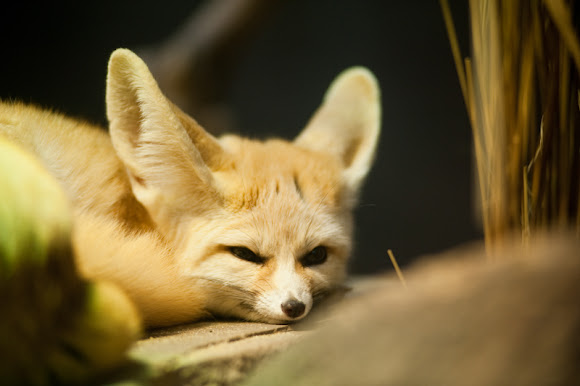 The Fennec Fox (Vulpes zerda) is a small nocturnal fox found in the Sahara of North Africa. Its most distinctive feature is unusually large ears. The name "Fennec" comes from the Arabic word for fox, and the species name zerda has a Greek origin that refers to its habitat. The Fennec is the smallest species of canid in the world; coat, ears and kidney functions have adapted to a high-temperature, low-water, desert environment. In addition, its hearing is sensitive enough to hear prey moving underground.

The species is found in North Africa and Asia. The range is from Morocco through to Egypt, as far south as northern Niger and as far east as the Sinai Peninsula and Kuwait. Here spotted in the Amsterdam Zoo

Adorable! Sad that he has lost his hunter instinct, though. Would be a great addition to the Captive Animals mission!
http://www.projectnoah.org/missions/7973...

That's the thing about zoo's. But they often give you excellent opportunity to see them close and make nice portraits.

He does have a pretty bored/ticked off expression. ;) These were my favorite animals when I was a child; adorable!

Thanks!
Boredom all over...

Look at those eyes!

@AshishNimkar The misery of the zoo, the predator instinct seemed to have disappeared.