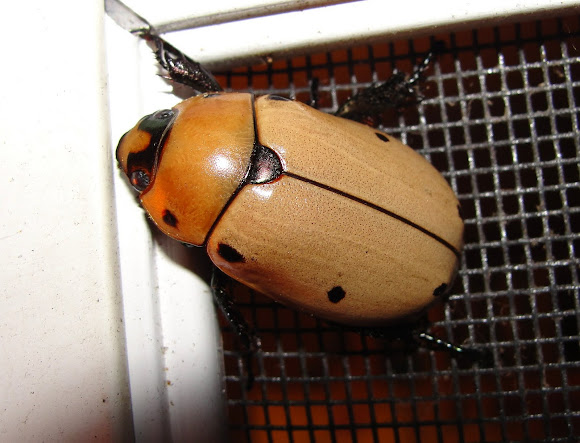 The adult beetle is approximately 1 inch long, but can reach 1.2 inches occasionally, off-yellow or auburn red, with three black spots running down each side. Fine black lines divide the edges of its elytra. The larva is tan and can be found in decaying roots and tree stumps. The adult beetle eats the leaves and fruit of grapevines, both wild and cultivated, although it is not normally a major pest of vineyards.Beetle eggs are laid in rotten wood, tree stumps, or on soil near the host plant, where they hatch into larvae. Larvae then dig their way into the soil, where they feed on rotted wood. Pupal chambers are built shallowly underground. The adults emerge in July.

The beetle lives in the eastern coast of North America, as well as Florida, Nebraska and north western Missouri, and has been found in central Indiana and south western Ontario Canada. It lives, like many beetles, in forests, thickets, and woods, and is mostly seen during the summer, active flyers these beetles are commonly attracted to lights at night. It is also seen in vineyards and gardens.