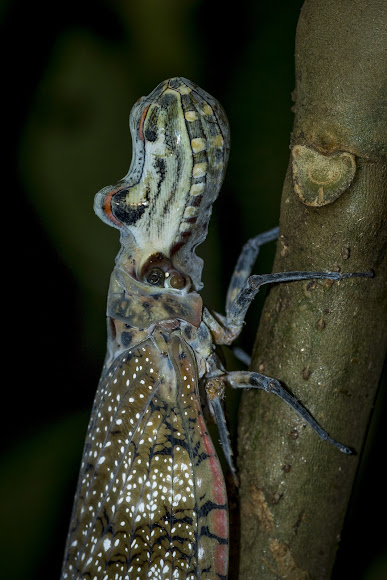 Large Planthopper (Family Fulgoridae) of about 7cm from tip of the head to the tip of the abdomen; irregular colouration in shades of brown, yellow, orange, and black; the tiny white spots on the wings are very bright and conspicuous; the peanut-shaped protuberance on the head carries four distinct orange markings and eye spots, which are believed to make it resemble the head of a lizard or snake.

Tropical rainforest in the Ecuadorian Amazon region. I found this particular specimen attracted to lights, just outside the town of Tena.

This species is known by a variety of common names, such as, Lantern Fly, Peanut Bug, Peanut-headed Lantern Fly, just to name some of the English ones.

Thanks you for the nice comment, Polilla. Much appreciated.

Thanks triggs, one of nature's many oddities.

Congrats on your SOTD Felix. What an amazing looking bug!

Thanks Lauren and António! Appreciate the kind words.

Great capture Felix,congrats on the SOTD and thanks for sharing

Very beautiful and great shots! I hope to come across one of these some day!!

Thanks Ashley, always a great pleasure to have a SOTD! And thanks for all the favourites :-)

Congrats Felix, this unique Lantern Fly has been chosen as Spotting of the Day!

I mean 'thank you', of course.

Thanks! One my of my favourites too. This is my first and only spotting so far, hoping the future will provide many more.

Oh awesome! One of my favourite insects. I spotted my first one just last winter in the Bolivian Amazon.