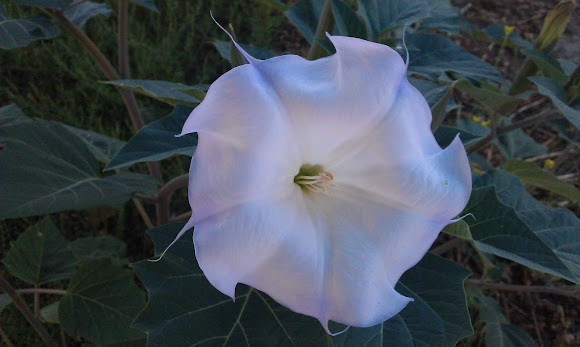 **Datura stramonium, known by the common names jimson weed, devil's trumpet, devil's weed, thorn apple, tolguacha, Jamestown weed, stinkweed, locoweed, datura, pricklyburr, devil's cucumber, hell's bells, moonflower[1] and, in South Africa, malpitte and mad seeds, is a common weed in the Solanaceae (nightshade) family.
It is an erect annual herb forming a bush up to 3–5 ft (1–1.5 m) tall.[2] The leaves are soft, irregularly undulate, and toothed. The fragrant flowers are trumpet-shaped, white to creamy or violet, and 2.5 to 3.5 in. long. They rarely open completely. The egg-shaped seed capsule is walnut-sized and either covered with spines or bald. At maturity it splits into four chambers, each with dozens of small black seeds.</b>

***Thornapple (Datura Stamonium, also known as Jimson Weed, Tapate, Pomme Poison, Devil's Apple, Malpitte, Stinkweed, Mad Apple, and Devil's Weed) is revered by many native peoples as a sacred, shamanistic plant and powerful aphrodisiac. The famous author Carlos Castaneda learned about Datura from his wise old brujo mentor, Don Juan... (Yaqui Indian sorcerer Juan Matus) According to Don Juan each part of the plant has a different power which must be conquered in its own special way. Many Native American tribes know the knowledge of this plant family (the Zuni, Chumash, and many others) Zuni rain priests use it to commune with their ancestor spirits to ask for rain. The Algonquin tribes made a beverage known as "wusocca" from Datura. The Auruk Tribe in Chile use Datura in much the same way as their ancestors did, for it not only plays a significant role as a shamanic plant but is also used as medicine. Datura is still widely used in the Caribbean, and there it is called "herbe aux sorciers" (herb of the sorcerers). In Mexico Datura is worshipped through "Santo Toloache", the patron saint of Datura. In Hindu cultures Datura is mixed with Ganja and smoked by Yogis to unify both the male and female in self into "oneness". The name, "Datura" is from the Hindoo "Dhatura", derived from the Sanskrit, "D'hustúra". The name "Stramonium" is of uncertain origin, and some authorities claim that it is derived from the Greek name of the "madapple". The seed capsules of the Datura species are usually about the size of a walnut and are covered with thorns. The appearance of these seed-pods has given rise to the English common name, "Thornapple".

The Navajo believe if you lose something, you eat a piece of Datura, and it will come to you in a dream. When you wake you can then find it. -(The American Wilderness/Timelife Books)

Very poisonous, not to be experimented with. The purple variety are sometimes rolled like a cigar and smoked by the Chinese for asthma and related symptoms.
What an exciting surprise for a spotting. When I first spotted them blooming about a month ago, the word Moonflower popped out at me. And they are AKA "moonflower". However the shamanistic properties and tales of how it is used world wide as an aphrodisiac, visonary, and medicinal herb are simply amazing. Sure glad i didnt pick any flowers!!

One more story from wikipedia, (this plant has amazing volumes of stories related to it online).
The James-Town Weed (which resembles the Thorny Apple of Peru, and I take to be the plant so call'd) is supposed to be one of the greatest coolers in the world. This being an early plant, was gather'd very young for a boil'd salad, by some of the soldiers sent thither to quell the rebellion of Bacon (1676); and some of them ate plentifully of it, the effect of which was a very pleasant comedy, for they turned natural fools upon it for several days: one would blow up a feather in the air; another would dart straws at it with much fury; and another, stark naked, was sitting up in a corner like a monkey, grinning and making mows [grimaces] at them; a fourth would fondly kiss and paw his companions, and sneer in their faces with a countenance more antic than any in a Dutch droll. In this frantic condition they were confined, lest they should, in their folly, destroy themselves — though it was observed that all their actions were full of innocence and good nature. Indeed, they were not very cleanly; for they would have wallowed in their own excrements, if they had not been prevented. A thousand such simple tricks they played, and after eleven days returned themselves again, not remembering anything that had passed. – The History and Present State of Virginia, 1705[11]

You have some very nice pics, Thanks and keep hiking barefoot. lol smiles