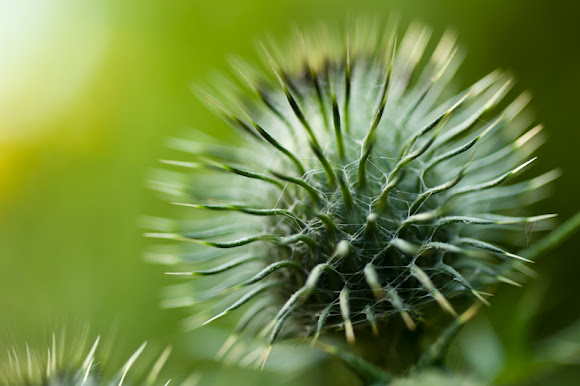 Spear Thistle is often a ruderal species, colonising bare disturbed ground, but also persists well on heavily grazed land as it is unpalatable to most grazing animals. The flowers are a rich nectar source used by numerous pollinating insects, including Honey bees, Wool-carder bees, and many butterflies. The seeds are eaten by Goldfinches, Linnets and Greenfinches. The seeds are dispersed by wind, and possibly also by ants; they do not show significant long-term dormancy, most germinating soon after dispersal and only a few lasting up to four years in the soil seed bank. Seed is also often spread by human activity such as hay bales.

Cirsium vulgare (Spear Thistle) is a species of the genus Cirsium, native throughout most of Europe (north to 66°N, locally 68°N), western Asia (east to the Yenisei Valley), and northwestern Africa (Atlas Mountains). It is also naturalised in North America and Australia and is as an invasive weed in some areas.

What strikes me most in this flower is its mathematical structure. Every details seems to follow some kind of algorithm.

Sure, you'll find me as @sttweets, just like on ProjectNoah

@tweact, are you serious? I can send a high-res version if you give me your e-mailadress.

Would make a lovely seventies wallpaper.

Nice pattern. This photo shows we have to watch nature a lot closer.

An offer hard to resist sttweets! I will email you and see how it goes.

Amsterdam (as most cities) is always good. For nature (besides parks) you'll have to get out of town. But, small as Holland is, you never have to travel far.
Maybe we can meet and I'll show you around.

this summer time, its not a bad idea isn't it sttweets?

sttweets, when it comes to nature , or nature lovers like us...where to in Amsterdam?

Correct, Amsterdam. It's really different from Ireland, Rainforest or desert, but there is plenty to see :-)

I believe you sttweets, I was thinking to do this summer. I live here in Killarney so it is a bit easy for me to organize my day with regards to Irish weather. :-). sttweets may I ask, you are in the Netherlands?

@Gina9210, Yes and I can recommend it. You need a day with Irish weather for the best atmosphere!

You are welcome sttweets, I had driven trough Gap of Danloe but not walking yet :-), Have you done it when you were here?

@Gina9210 Thank you!
I saw your spotting the other day, close to Kilarney. Have you ever walked the Gap of Dunloe?

Hi sttweets I received a message from my Facebook, you have been selected as a Noah rangers! wow! well done, congratulations!

Isn't it great that a plant so common and widely spread is of such beauty! If only you're aware and watch closely.

Wow. Such a cool plant.